in this page we will try to understand how the artists born or growth up in milano changed, during the years, their design taste…

A further reference to the processing of the 70 case is represented by “La Dura Legge del Gol”(1997), which is incorporated in the famous brand of football figurines Panini (mark which took a famous photo of Carlo Parola, a Juventus team player of the ’30s). The peculiarity of this packaging is that inside it were real figurines depicting musicians, the logo of the band and covers of their old albums made to be applied on the pages of the booklet, so that became a real album-figures. There are several curiosities on this disc: first on the cover the refree is Claudio Cecchetto (producer of 883); the figures included in the CD weren’t enough to complete the album/booklet, those lacking were distributed during the evening of the tour that accompanied the disc and included in the package of VHS video “Jolly Blue” sold shortly after the exit of the album. Last remark for the packaging: curiously, in the plastic rib was inserted a small yellow plastic ball rolling free on a green background that took over the lines of a football field.

The cover is clearly inspired by the famous comic strip of Dylan Dog by Tiziano Sclavi and it’s designed by Giulio De Vita, who creates a surreal environment where Max flees from an unspecified “monster” to take refuge in a house (note the strange moon that brings the features of the Earth). The inside of the booklet will be a
sample interior of the villa, ghosts, armor, that create with their blue and red lines a truly hypnotic and interesting effect. The most curious, however, the packaging is the movement effect of the cover, in fact it is printed with two different striped designs and placed one above the other. This allowed the observer (moving the package) to produce an effect of race for Max (effect obtained through the grooves engraved on the plastic front
custody). 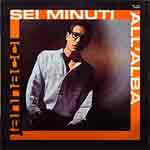 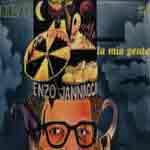 like the character, the album covers by enzo jannacci are extravagant, colourful and full of funny madness. starting by a normal, banal portrait of himself the artist grows up his taste trying new way of communication; passing through “la mia gente”, he arrives at “mexico e nuvole” (a parade of colors and words playing on a silouhette of a woman wearing a sombrero) and then at “quelli che…”, a representation of the modern concept of civility: big grey skyscrapers emerging from a desert, where the only thing which characterizes a man from each other is his name. 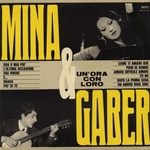 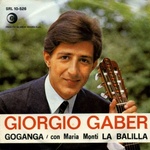 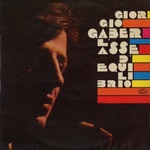 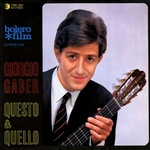 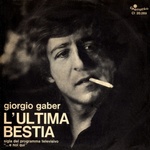 colors for giorgio gaber, a lot of colors as it used to be in the late 60’s early 70’s. gaber plays with them, with fonts, with his face and his big nose too. despite his fame, at least in italy, his name appears in every cover just like his visage. we’re quite far away from the album cover of beatles’ “abbey road”, where the quartet is the one and only subject of the scene. 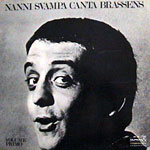 nanni svampa, one of the old masters of milanese scene, follow the style of his time: black and white portrait (colors didn’t exist!) for starting and then, while times were changing, pictures of himself in strange positions and combinations, with a particular mirror trick in the “perché?” album cover.